Moldless MIM: Fast prototyping to mass production with metal AM

If you’re designing metal components for high volume production (think 50,000+ annually), you know that the path to smooth, stable mass production can be anything but.

Traditional manufacturing processes that require specialized tooling — like metal injection molding (MIM) — can be extremely cost-effective at scale, but ramping up to volume production for a new part can be a jarring, stressful, and incredibly frustrating experience. There’s two high-level challenges here: sourcing prototypes that look and perform like their production counterparts, and developing the hard tooling, like molds, that a process requires. The latter hard tools commonly incur high costs and long lead times, but that only scratches the surface of the pain they cause. For companies on tight deadlines, the lengthy lead times for tooling mean that component designs must be locked in months ahead of time, often before a product development team is completely confident in the maturity of a part design. That’s a recipe for disaster: it puts immense pressure on engineers to ‘get it right’ on part and tooling design earlier in the development cycle, and leads to a high risk that expensive tools may require costly re-work, or in the worst case, be scrapped in favor of an extraordinarily costly expedited replacement.

Some examples of the wide diversity of highly complex parts that can be created with the MIM process (Source: Indo-MIM)

For all that advances in manufacturing technology have done to make hardware development more flexible, the challenges of hard tooling remain rigid, unforgiving barriers to getting products to market. That’s where metal 3D printing might be able to help: it can free you from much of these headaches by enabling you to rapidly build production-representative prototypes, as well as to serve as bridge production capacity while you tool up for MIM.

What does that mean for you? For one, it spells faster development and increased testing of prototypes, and it also allows you to delay cutting production hard tooling, extending your product development timeframe and making the cutover to mass production a much smoother, less stressful ordeal.

What is metal injection molding?

(If you’re already familiar with metal injection molding, skip ahead to the next section)

While it was invented decades earlier, it wasn’t until the 1990’s that MIM took to the global stage as a go-to technology for manufacturing small, precision metal parts economically in high volumes. MIM is widely used in medical devices (surgical instruments, implants), consumer products (smartphones, laptops, wearables, jewelry), automobiles, firearms and precision instrumentation.

MIM parts begin life as fine metal powders mixed with wax or polymer binder agents, that are then injection molded to form a “green” part. Green parts then often go through a thermal or chemical debinding step, which removes a portion of the binder, to prevent cracking issues during subsequent sintering. After debinding, the resulting “brown” part is then sintered in a furnace to remove the remainder of the binder, condense the part, and diffusion bond, or fuse, the metal powder particles into a single solid object. The resulting parts reach densities of 96% or greater and possess physical properties similar to annealed parts produced by other manufacturing processes. 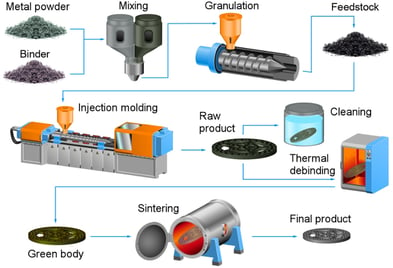 The challenges of mass production

A key process limitation to MIM is a lack of rapid part design flexibility, which is due to the initial injection molding stage. Each MIM part requires an injection mold to create the green parts for subsequent processing, which are generally machined in steel and finished via grinding or polishing. These injection molds come with two primary disadvantages:

MIM molds are typically CNC machined out of tool steel although aluminum molds may be used for limited production runs. In either case, suppliers require many weeks to several months to produce molds and then run a batch of MIM parts. Even simple molds can cost tens of thousands of dollars, and more complex production molds often run well into six figure territory. Reserving machine time with an injection molder also typically involves coordinating production schedules and incurs a setup cost — and molders prefer to run large, lucrative jobs over short manufacturing runs. Given the fixed costs involved, suppliers generally recommend volumes of 10,000 units a year or greater for MIM production.

But what about all the prototyping that happens before scaling to production? While there are tools and services available for small-scale prototype molding and sintering, they require a minimum of 3-6 week lead times and remain restrictive to the development process. CNC machining is often used to prototype MIM components but cannot always replicate molded geometries, produces parts with different mechanical properties, and can have extensive lead times. Because of these limitations, engineers will often employ extensive simulation of both the mechanical performance of parts destined for MIM, as well as mold flow analysis of MIM tooling, to minimize the risk of cutting production tooling that will later need rework or replacement. Regardless, there is no easy way to quickly prototype anything but the simplest MIM parts, and that makes the development process for MIM components slow and expensive. This weakness in MIM is ripe for innovation with metal additive manufacturing.

Accelerate MIM development with metal AM

In stark contrast to MIM, one of the primary advantages of AM is rapid design iteration, even for high complexity parts. With metal AM, you can print new, completely unique geometries in every build of parts, without large upfront costs or lead times. Since each part is digitally formed by adjusting the geometry or path of an energy source — rather than via a fixed geometry tool like a mold that itself must be first manufactured — adjusting the geometry of what’s being printed is as easy as changing a digital model. Metal AM’s strength in fast and easy design changes neatly complements the main weakness of MIM, and can be a powerful tool for prototyping and bridge production of parts destined for full production scale MIM.

Choosing the right metal AM process is key to accelerating your design process for MIM parts. In an ideal world, your 3D printed metal prototypes would perfectly match the geometry, material composition and properties, and mechanical performance of their mass production MIM counterparts, allowing you to test and simulate exactly how those production parts will perform. In reality, for any given part geometry there will always be some performance differences between a 3D printed version and a MIM one — the key is to choose a metal AM technology that can mirror MIM part performance as closely as possible.

Holo PureForm parts are excellent prototypes and bridge production units for parts destined for MIM — or simply as production parts if your required volumes don’t justify cutting a mold.

Holo’s PureForm™ metal 3D printing service is a great fit for speeding up the MIM part development process, because it combines the speed and flexibility of AM with industry-standard MIM materials and sintering processes, and delivers a pathway to scale up production, either with Holo or traditional MIM suppliers. Green parts, consisting of standard MIM powders and custom polymer binders, are first produced without a mold via a proprietary digital light projection-based (DLP) photopolymerization printing process that can build highly complex geometries with micro-scale individual features in the tens of microns range. Those parts are then sintered using the same industry-leading furnaces employed by production MIM suppliers.

The materials used in the PureForm process contain exactly the same MIM powder cuts used in production MIM feedstock, and parts supplied by Holo will closely match MIM versions in both material composition and mechanical performance. In addition, the PureForm printing process leverages a high-resolution digital projector, optimized by Holo’s in-house software to produce extremely dimensionally accurate parts, similar to CNC machined components with typical tolerances of ±0.05 mm (±0.003 in.) or better. A combination of ultra thin printed layers and the micron-scale MIM metal powders used in the PureForm process also results in a high quality surface finish with typical part surface roughnesses of 1.5 µm Ra out of the furnace, no post-processing required.

Holo’s technology unlocks ‘moldless MIM’, and opens up a new world of product development possibilities. MIM parts with no minimum quantities. Near-exact MIM prototypes in two weeks. You can drastically improve your design process and product quality, by rapidly iterating through many more prototype cycles, resulting in better designed production parts. Holo’s PureForm metal AM service can cost-effectively support quantities into the 10,000s of units per year, without transitioning to MIM. And if your volume warrants, you can accelerate the transition to MIM production with Holo qualification parts that closely match future molded parts.

Want to supercharge your MIM component development? Let’s chat — contact our team to review your project and see if we can help! 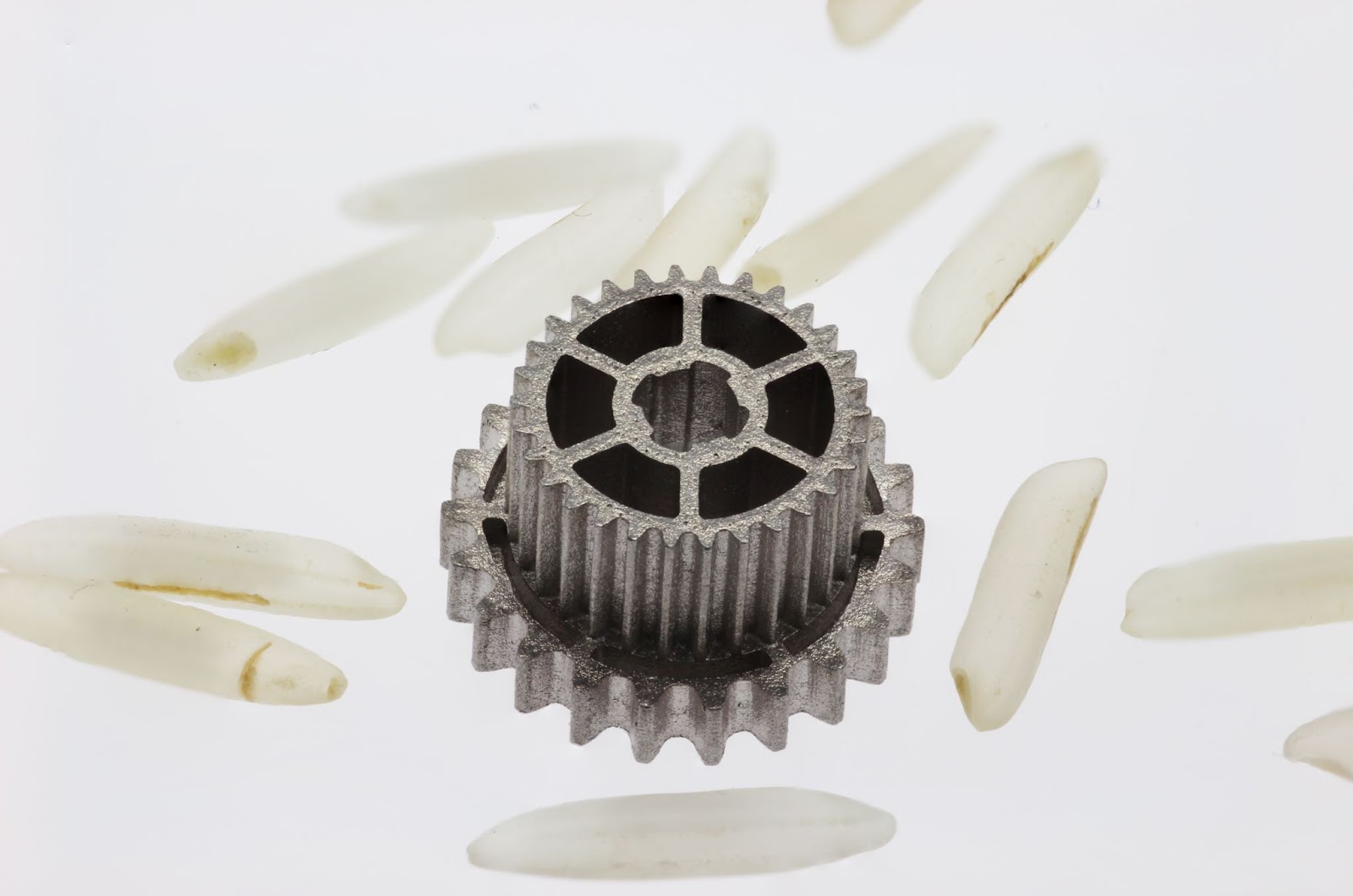 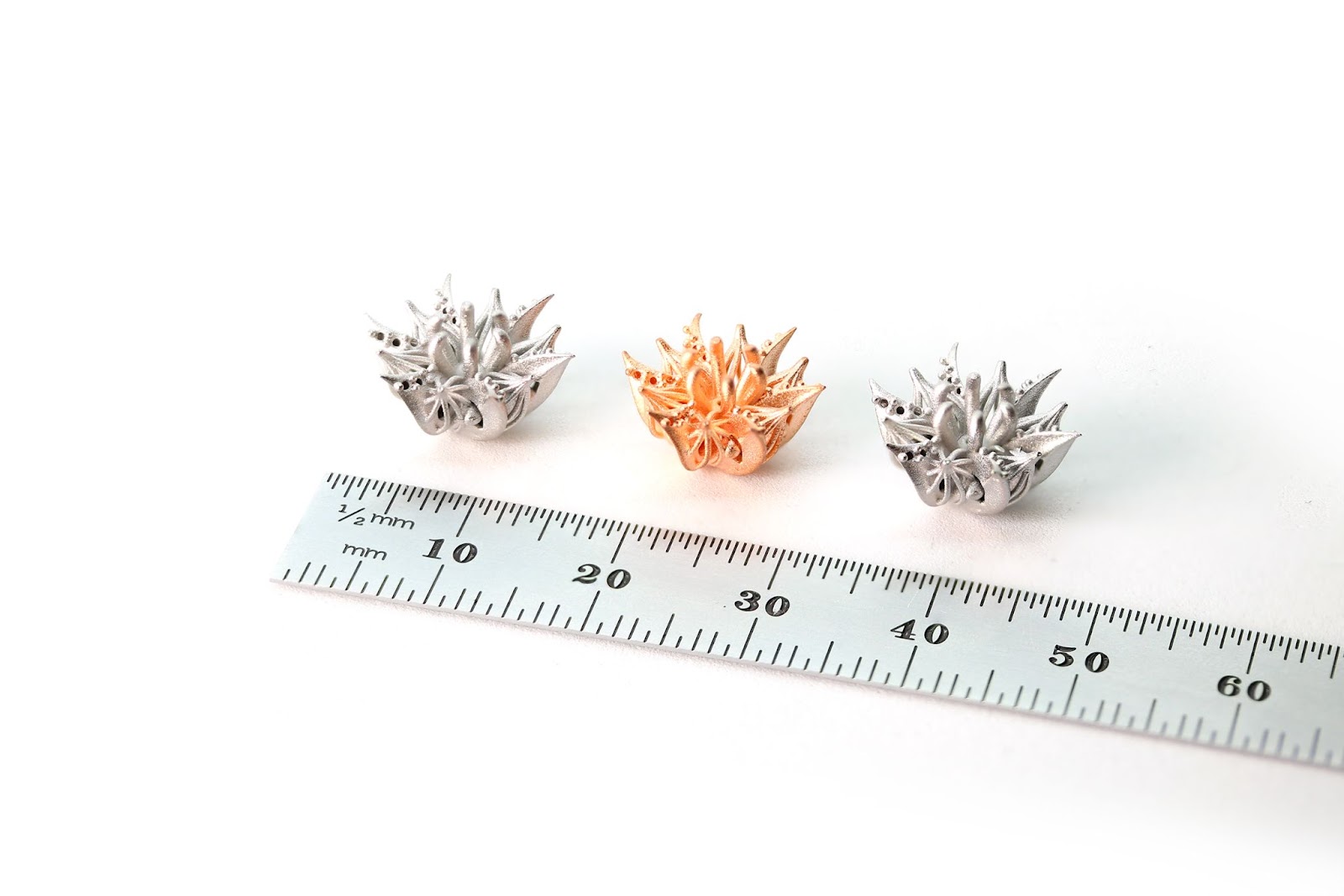